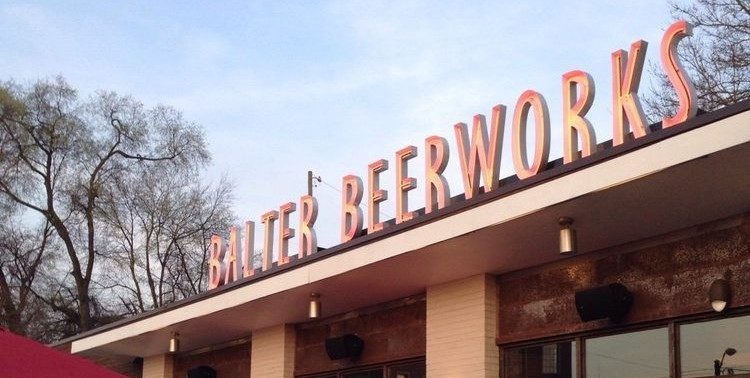 You might be expecting an introduction to the Balter family at this point.

It turns out “Balter,” according to the Balter Brewing website, is a verb meaning to “dance without particular grace or skill, but with enjoyment.” Sounds like a fun place and that’s exactly what Blaine Wedekind told me they intend to build at the corner of Jackson and Broadway – the site of the former Corner BP. In short, the concept is a craft brewery with a restaurant serving “elegant bar food,” a beer garden and sometimes scene for live music. Sounds like a place one might just decide to balter.

Blaine is a fourth generation Knoxvillian. A West High School graduate, he earned a business degree at the University of Tennessee and worked for Cherokee Distribution. His partner in the new venture will be responsible for the brewing portion of the equation. The partner (and friend) isn’t ready to be named just yet, but has home-brewed beer for eight years and has some commercial experience. He also has a degree in bio-systems engineering, which should come in handy. While the two partners developed the concept and will manage the business, they are joined by several equity partners including Blaine’s father, David.

The brewing component will include a seven barrel system with the intent of creating, “big flavorful, unique beers.” Blaine said the two, “want to help put Knoxville on the map for brewing trips.” They want it, “to be an experience for the beer explorer.” The intent is to brew enough beer for the brew pub and for customers to take home in growlers.

They have no plans to bottle or distribute the beer, meaning people will need to come to Knoxville to experience it. Available beers will include an IPA, Brown Ale, Porter, a Huckleberry Wheat Ale, and a Breakfast Stout. That one caught my attention. He said breakfast malts would be used. I’m certainly intrigued. They will also serve wine, which he assures me will be of a good quality (he’s considering Decoy Wine) and they will also have a full bar with craft cocktails. He wants everyone to find something to enjoy.

By “elegant bar food,” Blaine means simple meals that can be easily prepared, but which include quality ingredients, which he hopes to source locally as much as possible. They are planning to have sliders and at least one burger. He’s interested in street tacos featuring locally-made tortillas and an extended appetizer selection. They plan to have fresh vegetables and food not commonly found downtown. In other words, it will be light, but with gourmet flair. He wants the food to be of a quality that people will consider it a lunch spot – with really great beer.

They’ve already begun assembling a staff and have already secured the services of a chef and general manager. Once they reach full staffing, he anticipates having fifty to sixty people on payroll. They are looking to partner with a local farm for beef and other products and would like to recycle their spent grain back to that farm. They want the staff to be knowledgeable about craft beer in order to enhance the experience and, hopefully, inspire potential home brewers to give it a try.

A beer garden will also be included, which is where you might encounter live music. From the beer garden, patrons will be able to watch the brewing process and ask questions of the brew master, if they like. The intent is to have a comfortable, educational and fun experience that will inspire patrons to be more involved and out-of-town guests to travel to the city to give the beer a try.

John Sanders is working as local consultant, while Tim Trapp of Trapp Associates is handling the design end and Allen Corey of Square One Holdings is providing support on the business end. In a special arrangement, Carolina Brewery of Chapel Hill has agreed to have Blaine and his partner work with them for the next three months in order to learn the operations side of the business. He points out that the Mayor’s office, and Bob Whetsel in particular, has been very helpful, making it possible for them to do the project.

Parking is also available on site for out of town visitors or people simply driving in from out of downtown. They will also provide bike racks and hope to promote walking and biking to the pub which is directly between downtown proper and the northern ring neighborhoods.

The tentative plans include beginning production in May, with an eye toward a potential opening date of August 1. They expect large game-day crowds in the fall and hope to have some practice time before the business heats up to that degree. They anticipate hours will be 11:00 AM to Midnight.

So there’s more of the good news I told you would mark this year – and there’s more to come. Check out their website and like them on Facebook so they know the love that’s coming their way. I’ll see you there when the weather is warmer.